The City Of Los Angeles 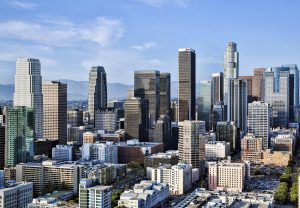 Los Angeles is a sprawling city in Southern California. With its iconic Hollywood sign, it is known as the center of the US film and television industry. World famous studios such as Warner Brothers, Universal, and Paramount Pictures offer behind-the-scenes tours while TCL Chinese Theatre displays the hand and footprints of celebrities on Hollywood Boulevard.

Thousands of luminaries are honored on the Walk of Fame with vendors selling maps to the homes of Hollywood stars. The name "Los Angeles" comes from the Spanish meaning “The Angels”, which is an abbreviation for the original name “El Pueblo de Nuestra Senora la Reina de los Angeles del Rio Porciuncula or “Town of Our Lady the Queen of Angels of the River Porciuncual” in English.

The seat of Los Angeles County is the second most populous city in the United States after New York City. The city sprawls across a broad coastal plain situated between the Pacific Ocean and a mountainous area. It is encompassed by the much larger Los Angeles County that incorporates 90 other cities including Long Beach, Beverly Hills, and Pasadena as well as the two Channel Islands, San Clemente and Santa Catalina.

At the beginning of the 20th century, Los Angeles was considered to be merely a large village but recently it has become a world-class city known as the heart of southern California. Even though it lacked the essential building blocks usually associated with city-hood, like a harbor, it managed to establish itself as an important center for commerce, tourism, industry, and agriculture. Today this sprawling metropolis is known for its ethnic diversity, Mediterranean climate, and Hollywood - the entertainment capital of the world that draws aspiring actors and actresses from across the world.

Sun seekers come to Los Angeles to enjoy the warm climate, the many beaches to relax on, and interesting neighborhoods to explore. Recent upgrades to its public transport network and the creation of a bike share program have contributed to making sightseeing easier than ever. Nearby key destinations like Universal Studios and Disneyland makes it a perfect getaway for families.

Griffith Park is the largest state park in California and is home to the Griffith Observatory, the Los Angeles Zoo, a Greek theater, a planetarium, golf courses, and tennis courts. Walking and hiking trails offer views over the city and beyond and the riding center was created in the park for the 1984 Olympic Games.

Santa Monica is a chic and laid-back destination in its own right. With its stretch of beautiful golden sand beaches and the Santa Monica Pier with its iconic Ferris Wheel, it attracts thousands of tourists every year who come to enjoy all the experiences it has to offer.

The Natural History Museum is best known for its 14,000 square foot Dinosaur Hall with its amazing display of dinosaur skeletons. A must-see exhibit is “Becoming Los Angeles” which explores the past five hundred years of Southern California’s history. The California Science Center houses the famous Space Shuttle Endeavour exhibit where you can view the space shuttle, artifacts from the space mission, and learn about the astronauts involved in the space program.

These are just some of the many places of interest that can be enjoyed on a visit to the City of Los Angeles. Beverly Hills is famous for its designer boutiques along Rodeo Drive and Downtown Los Angeles bristles with art galleries, restaurants, and malls amid impressive skyscrapers.